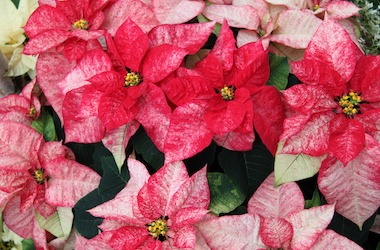 Poinsettias are a hallmark in the winter flower shows at Garfield Park Conservatory, Lincoln Park Conservatory and in winter and holiday displays around the US. Join the Chicago Park District’s Deputy Director of Horticulture, Peter Vrotsos and Chicago Park District Floriculturist at Lincoln Park Conservatory, Pedro Ramirez as they talk about the history and use of poinsettias and how to care for them beyond the holidays. You’ll also get a behind-the-scenes look at how they are grown for the winter flower shows and go on a virtual walk through the Garfield Park Conservatory’s Winter Flower Show: Gratitude.  This program is free and donations are appreciated from those who are able to off-set programming costs.

In 2014, Peter left Chicago to become the Conservation Horticulturist at Fairchild Tropical Botanic Garden in Coral Gables, Florida. In that position, he documented critical declining populations of plants native to South Florida, while developing and executing a plan to restore populations.

Peter returned to Chicago in 2017 for his current position as Deputy Director of Horticulture for the Chicago Park District Conservatories. In this role, he establishes horticultural standards and manages horticultural operations to ensure the health and diversity of plant collections.

PEDRO RAMIREZ was hired by the  Chicago Park District in September 1998 as an Apprentice; his promotion to Floriculturist Class II was March of 2003 and he began growing the poinsettias in 2006. He is a graduate from Triton College in Ornamental Horticulture, Floral Design and Greenhouse Management. While at Triton, Pedro’s favorite subject matter was greenhouse management and learning pest life cycles in Entomology. Pedro is a lover of all the poinsettias varieties but considers the classic red style to be his favorite.

Some of Pedro’s highlights include working the set up for the Conservatories flower show, including Navy Pier Flower and Garden Shows, Macy’s Flower show, and visiting wholesaler greenhouses. In 2018, he was selected to attend Millstadt Young Plants and N.G. Heimos Greenhouses Trial Open House for yet to be released poinsettias. When Pedro is not active with the poinsettias, he grows Easter lilies, hydrangeas, and annuals for the Spring Flower Shows.

Thank you to the presenting sponsor of the Winter Flower Show: Gratitude