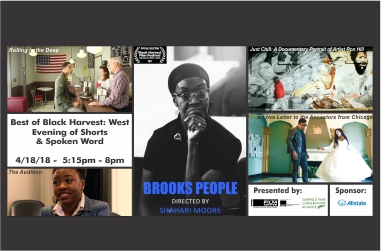 Brooks People – 2017, Shahari Moore USA, 22 min. A tribute to Gwendolyn Brooks, the Chicago-based poet who was the first African American to win the Pulitzer Prize.

Rolling in the Deep – 2017, Marcellus Cox USA, 12 min. A Black World War II veteran demands to be served in a Whites Only diner. Based on a true incident.

Just Chill: A Documentary Portrait of Artist Ron Hill – 2015, Brian Chaplin USA, 7 min. Ron Hill aka “Chill” recalls his parallel careers in the worlds of advertising (as a designer) and hip-hop (as a d.j. and graffiti artist).

A Love Letter to the Ancestors From Chicago – 2017, Ytasha L. Womack USA, 14 min. An Afrofuturist experimental dance film, performed in the corridors, stairwells, and basements of South Side Chicago.S

Special Guests: Directors Shahari Moore of Brooks People and Ytasha Womack of A Love Letter to the Ancestors from Chicago.

Spoken Word Performances by After School Matters teens inspired by the films and the Garfield Park Conservatory collection. GPC Urban Roots teens will be helping out during the event, and starting at 4:30pm will be in the collection highlighting their favorite plants so come early!

Garfield Park Conservatory will also host a screening on May 16.

BBF Family Services is hosting screenings on April 28 and May 11.

All screenings are FREE and include a post-film discussions with filmmakers and special guests. All ages, and especially teens, are all encouraged to come! Doors open at 5:15pm with screenings starting a 5:40pm and light refreshments will be served.