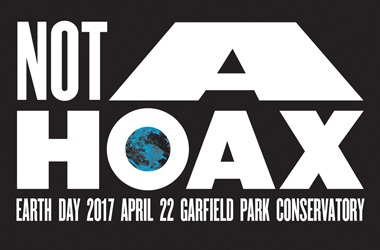 While last year’s sold out Earth Day party highlighted preserving our environment’s pollinators, this year’s event – Not a Hoax – will focus on climate change. The party will feature drinks, food and music curated by Land and Sea Dept., alongside environmental programming from NRDC.

A fundraiser and a call to action, the event seeks to raise awareness about a suite of environmental protections under attack, and aims to harness the energy and passion of the public to pressure lawmakers into recognizing climate change as a serious and real problem.

Proceeds from tickets and a portion of bar sales will help NRDC and the Garfield Park Conservatory Alliance continue their vital work protecting the environment.

“This is the 47th year that the world will celebrate Earth Day. We’re more determined than ever to make sure our country’s 45th President does not thwart the incredible progress we’ve made to combat climate change internationally, nationally and locally.” said Elizabeth Corr, Manager of Art Partnerships & Events at NRDC.

Chicago-based Air Credits (a collaboration of The Hood Internet and ShowYouSuck) will be performing during the party, with opening sets by local favorites Sidewalk Chalk and Audio Jack.

Chef Abra Berens of Local Foods will be creating a menu of Earth Day-oriented bites for a special VIP hour (6-7pm). Minimizing food waste and supporting the planet are both very important in Chef Abra’s day-to-day work, and those values will surely be reflected in the VIP hour offerings.

The VIP hour will also include cocktails by Land and Sea Dept. beverage director Paul McGee featuring Corazon Tequila, as well as bio-dynamic wines selected by LSD wine director Andrew Algren and beer from Lagunitas, a local member of the NRDC’s Brewers for Clean Water campaign.

Wine, beer, and cocktails will also be available during the general admission portion of the night. All drink tickets must be purchased in advance of attending via Ticketfly.

As an added bonus, Chicago’s bike share program, Divvy, will be offering a free 24-hour pass to the first 75 ticket purchasers.

Thank you to our NOT A HOAX Sponsors: Boxed Water, Corazon Tequila, Dry Sparking, Divvy, Lagunitas and Vero Design & Build.