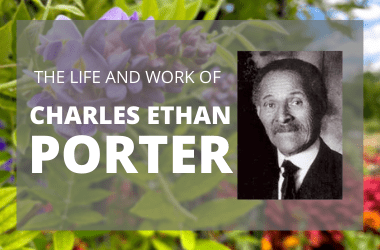 Join us for an exploration of the life and work of African American still life painter Charles Ethan Porter with Garfield Park Conservatory’s Manager of Design and Exhibits, June Ahn.

CHARLES ETHAN PORTER (1847/49-1923) was the only African American artists to specialize in still life painting. He was celebrated by his contemporaries for his vibrant portrayals of everyday objects, rich colors, and the remarkable realism of his paintings. While he is now recognized as one of America’s great still life painters, art dealers and historians didn’t significantly embrace Porter until the 1980s. Throughout his lifetime, he was unable to reach critical and financial success. The invisibility of his work and his struggle with racism and prejudice are as significant to his story as his masterful paintings.

Porter was born in Rockville, Connecticut and, like many other families during the Civil War, much of his adolescent life was clouded by the loss of seven siblings. Even as a child, he showed a clear aptitude for drawing and his family nurtured his creativity and spirit of optimism. His fascination with the native nature of Connecticut may have started with his mother’s garden and provided endless inspiration throughout his career. Porter became the first African American to attend the prestigious National Academy in New York and continued his training in Paris where he attended the French National Academy for Decorative Arts and Académie Julian. In 1897, Porter returned to his hometown where he continued to work and teach until his death in 1923.

JUNE AHN is a plant enthusiast who is focused on environmental justice and advocacy around access to cultural spaces. She studied plant biology at Smith College and recently graduated with her masters in Museum and Exhibition Studies from the University of Illinois at Chicago. She is currently working at the Garfield Park Conservatory as the Manager of Design & Exhibits.

In 2014, Peter left Chicago to become the Conservation Horticulturist at Fairchild Tropical Botanic Garden in Coral Gables, Florida. In that position, he documented critical declining populations of plants native to South Florida, while developing and executing a plan to restore populations.

Peter returned to Chicago in 2017 for his current position as Deputy Director of Horticulture for the Chicago Park District Conservatories. In this role, he establishes horticultural standards and manages horticultural operations to ensure the health and diversity of plant collections.

This lecture is free but we welcome donations to help offset programming costs. Auto-generated captioning will be available.