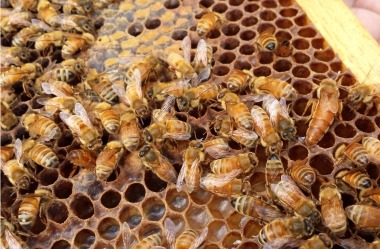 Simple, Smart Beekeeping
In German, there is a popular saying “Wieso einfach, wenn auch umstandig”, which means why take the simple route, when there is a complicated one. As humans, we gravitate toward complicated answers. Maybe we’re drawn to complex solutions, because if it’s difficult and we fail, it’s understandable and we don’t feel bad. But beekeeping need not be complicated, difficult or complex. Learn to keep healthy hives in an easy, carefree way so you enjoy your hives and feel confident working your bees.

Varroa: Biology, Control and Virus Transmission
Varroa continues to be one of the biggest drivers of colony losses. It’s easy to think you don’t have varroa, as 70-80% of the mites are hidden beneath wax cappings in the brood nest. Hidden out of sight, the varroa feed on developing bees when they are at their most vulnerable. This talk shows detailed photos of varroa. It highlights how varroa spread viruses, and how your colony can pick up mites from the neighborhood. To help stay on top of varroa, I highlight simple methods of monitoring varroa levels and how to control escalating infestations.

About the Presenter: Dr. Traynor works full time as a honey bee researcher, runs Flickerwood Apiary (www.mdbee.com), a boutique operation that specializes in producing top quality nucs and MD queens reared from mother colonies still going strong in their 2nd and 3rd year and is the current editor of American Bee Journal.

In 2006-2007, Kirsten received a German Chancellor Fellowship & drove over 50,000 miles throughout Western Europe to study the differences between European & American beekeeping. She reported her findings through 50+ published articles in American Bee Journal. Fascinated with the social complexity of a honey bee hive, she earned her PhD in biology from Arizona State University with Dr. Robert Page. While a grad student, she spent almost a year in Avignon, France in the lab of Dr. Yves Le Conte as a Fulbright Fellow. She investigated how pesticides impact honey bee health as a postdoc with Dr. Dennis vanEngelsdorp. She is the author of Two Million Blossoms: Discovering the Medicinal Benefits of Honey and Simple, Smart Beekeeping. She also manages a boutique organic apiary producing top quality nucs and Maryland reared queens. Using the biology of the bee against the biology of the varroa mite, she keeps her colonies healthy without synthetic chemicals and loves sharing her knowledge with avid beekeepers.