Music Under Glass: The Alonso Brothers 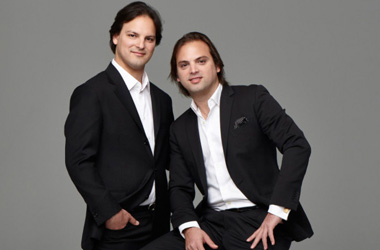 This season’s three concert series promises to bring to a focus the music of Cuba. Cuba is a country with a palpable rhythm. Music and dance are the heart and soul of its people. Cuba’s culture comprises an energetic mix of soulful Spanish melodies, lyrical traditions, and dynamic African rhythms.

Join us for our second concert in the Cuban series, featuring the two Alonso Brothers who have taken the music world by storm! Orlando Alonso has performed all over the Western Hemisphere and will participate in upcoming performances with Yo Yo Ma and violinist Joshua Bell among others. The young virtuoso won the Frinna Awerbuch contest in New York and is also a member of the Bohemian Trio.

Orlay Alonso received rave reviews after his Carnegie Hall debut in 2003. Known as a young rising star, the young pianist has toured widely in US, Canada and Chile in addition to many other places. Both brothers have studied in New York with Horaccio, Guttierez and Jorge Luis Prats and Claude Franck among other great pianists.

We know you will be thrilled to hear this extraordinary program featuring romantic works from Cuba, Czechoslovakia, Spain, and Argentina. The great impressionist work and rarely heard Epigrahes Antiques of Claude Debussy will be woven into this wonderful program.

The enchanting sounds of five worlds will tantalize your senses and enlighten with a greater appreciation of Cervantes, Dvorak, De Falla, Piazolla and Claude Debussy.

– Malagueña (The Girl from Málaga)

Music Under Glass is a fundraising effort that engages classical music lovers in an idyllic setting to raise funds for the Garfield Park Conservatory Alliance’s educational and cultural programs and classes.  Tickets are priced as:

Reception is from 4pm-5pm. Post-concert reception includes light refreshments and the opportunity to visit with the performers.

Save the date and join us for the final Cuban concert in the 2018-2019 Music Under Glass series!

Thank you to our Music Under Glass 2018-2019 Series sponsors CIBC and US Bank.